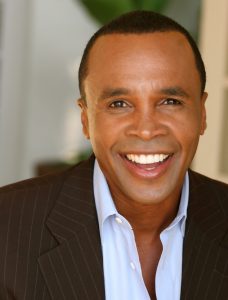 Legendary sports icon, Olympic champion and Hall of Famer, philanthropist, bestselling author, television personality, ringside analyst and longtime face of Skechers’ popular Relaxed Fit collections, Sugar Ray Leonard has established a legacy that epitomizes boxing and invokes the reverence of a champion. Leonard’s illustrious career outside of the ring merits like admiration, as a vanguard in the cultural movement that has brought the sport of boxing front and center today; Leonard also helms the Sugar Ray Leonard Foundation which celebrates its 12th anniversary this May, committed to funding life changing research for pediatric type 1 & type 2 diabetes, and helping children build early healthy habits.

Having learned to box at the young age of 14, Leonard’s celebrated career includes three National Golden Gloves titles, two Amateur Athletic Union (AAU) championships and the 1975 Pan-American Games crown.  After winning a gold medal in boxing at the 1976 Olympic games, he turned professional as a last ditch effort to help his family defer mounting medical bills incurred from father’s illness.  Blinding speed, tremendous power and palpable charm quickly made Leonard a media favorite, dubbed early on by the late Howard Cosell as the “new Muhammed Ali.”

At the age of 20 (1977), Leonard won his first professional fight, only setting the stage for a collection of the most memorable fights in all of boxing history.  He went on to defeat some of the greatest boxers of the modern era, from Wilfred Benetiz to Roberto Duran, Thomas Hearns and Marvelous Marvin Hagler, from whom Leonard won the world middleweight title.  During his 20-year professional career, Leonard also won world titles in the welterweight, junior middleweight, super middleweight, and light heavyweight divisions— the first boxer to win world titles in five different weight classes.

In 2011, Leonard published his first autobiography (Viking Books) THE BIG FIGHT: My Life In and Out of the Ring. In the inspiring autobiography, the boxing legend vulnerably confronts his greatest competitor: himself. Sugar Ray Leonard’s raw and uplifting memoir reveals in intimate detail for the first time the complex human who waged his own personal battle with depression, rage, addiction and greed, that lay behind the champion.

Leonard’s charismatic personality and expert ring knowledge led to a successful career as a television broadcaster for NBC, ABC, FOX, HBO and ESPN, also featured as the international commentator for the record-breaking Mayweather vs. McGregor fight. Other television credits include three consecutive seasons as host and mentor in the Emmy-nominated “The Contender,” and a fan-favorite contestant on ABC’s still reigning competition series, “Dancing with the Stars.” Now, Leonard joins the DAZN broadcast team, the live and on-demand sports streaming platform, providing ringside analysis for Matchroom Boxing.

Perhaps most importantly, some of Leonard’s most impactful work is yet to be done. With a deep calling towards and passion for humanity, Leonard has always been devoted to his community and to helping those in need. In establishing The Sugar Ray Leonard Foundation in 2009, Leonard and his wife, Bernadette took changing the world into their own capable hands. Since its inception a decade ago, the foundation has funded countless research projects and offered life changing patient care for children living with type 1 and type 2 diabetes. Furthermore, the foundation is also committed to helping children lead healthier lives through diet and exercise, equipping them with the tools to be successful in health later on. Leonard also lends his time to Habitat for Humanity, serves as co-chair for the Ambassadors of Children’s Hospital Los Angeles (CHLA) and remains the international chairman of the Juvenile Diabetes Research Foundation Walk for a Cure.

Leonard has four children and lives in Southern California with his wife, Bernadette.